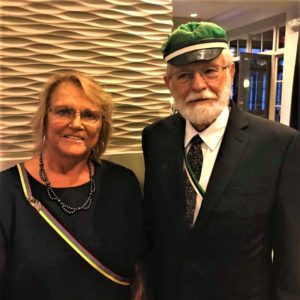 Dagnija Kreslina (nee Stemme) is a child of exile. During World War II, Dagnijas father, Karlis Stemme from Jelgava, was drafted and served as a Latvian legionnaire. After the war, he arrived in Darmstadt, Germany, where he met and married Laimdota Zvirbule. After the birth of her daughter Dagnija in 1947 the family moved to a refugee camp in Esslingen. In 1950, the family emigrated to America and settled in Long Island, New York. Dagnija and her brother Egils grew up in a Latvian environment and, together with their parents, became actively involved in Latvian society.

In 1969, Dagnija graduated American university (Washington, D.C.) with a bachelor’s degree in international relations and political science, specializing in Russia and Eastern Europe. During her studies, Dagnija worked as an assistant in the office of the American Latvian Association in Washington and was active in Latvian public life in Washington.

After graduating Dagnija worked as an administrative assistant in the office of the US Republican National Committee. In 1972, Dagnija was hired as an assistant to Dr. M. Balzano in the White House. The office was responsible for liaising with ethnic groups, as well as for developing the press and ethnic relations with the US President and his administration.

From 1974 to 1984 Dagnija served as a U.S. diplomat in the U.S. Peace Corps, and in 1984 Dagnija joined the U.S. Agency for International Development, specializing in humanitarian aid, development projects, and development in Africa and budget formulation. In September 1991, when the United States recognized the independence of Latvia and the other Baltic states, Dagnija began working in the agency’s European office as the first head of the Baltic chapter. From 1991 to 1993, Dagnija reviewed projects in Latvia, where USAID invested more than $ 25 million in education, agriculture, electricity, democracy, health and business development projects. From 1993 to 1995, Dagnija lived in Riga and was the director of the US Peace Corps in the Baltic States.

As Dagnija’s career has been related to international relations and the implementation of various assistance programs abroad, especially in Latvia, the Kreslini family hopes that several new diplomats will come in the next seven years to honor Latvia.

Dagnija married Kaspars Krēsliņš in 1970. Kaspars was born in Riga and is the third son of pharmacist Arnolds Kreslins and Vallija Kreslina (nee Lubaus). Before the Second World War, his father owned pharmacies in Malpils, Rujiena and Riga. In the 1930s, his father was also the mayor of Rujiena. Like thousands of other Latvians, the family fled to Austria and Germany in 1944. After spending four years in the Esslingen, the family went to America in 1949 and settled in New Jersey. Kaspars also grew up in a Latvian environment and has been active in several Latvian organizations – the American Latvian Association (ALA), the Washington Latvian Ev. lut parish, Latvian Organization in Washington (LOV), and corp. “Latvia”. Kaspars holds a bachelor’s degree in business development and accounting from Rider University and a master’s degree in business management from George Washington University. He worked for many years as a state auditor in the US Office of Personnel Management (OPM).

The family has two sons – Kristaps and Laris. Kreslini often travel to Latvia, where the eldest son Kristaps and his family (wife Hanna and daughters Lulu and Livija) have been living since 2008. Kristaps is currently the owner of the restaurant “Enkurs” in Pavilosta. The youngest son, Laris, is a marketing specialist and lives with his wife, Irina, and son, Igijs, in Philadelphia, America.

Amount of the scholarship per academic year  2200 EUR